No comments to show.

A lot of us never need to get behind the business end of a microphone. But for those who have to present regularly, it is important to have a basic understanding of how different microphones work. Then we are able to adapt our speaking technique to suit the microphone in front of us as we deliver our message. This is a quick guide to using microphones effectively for presenters of all ages!

Microphones are components in virtually all audio systems.

That said, all microphones have one thing in common: “microphones convert a sound wave into an electrical signal in which the voltage and current are proportional to the original sound”.  To perform this task microphones use a thin membrane, known as a diaphragm, which mimics the function of the human eardrum.  Sound waves strike a microphone’s diaphragm and cause the diaphram to move. Harnessing this movement creates an electrical signal.

A sound is essentially a change in pressure that varies in specific ways over time to create specific sounds (sound waves).  When sound waves strike a microphone’s diaphragm, they cause it to move, which movement, in turn, creates a variance in an electrical current (aka signal).  The electrical signal is transmitted to output devices, which either process the electrical signal (store it, or make it louder, or make it sound like Darth Vader on a bad hair day), or use the signal to recreate sound waves (loudspeakers).

Microphone engineers, over the course of “recorded” history, have developed 3 fundamental techniques for detecting sound waves and “transducing” sound to electrical signals.

A condenser microphone uses the diaphragm to move one side of a capacitor plate thus causing the capacitance to vary. This creates an electric signal.  The advantages are it has good resiliency, can cope with large variances in the sound loudness and tends to have a larger frequency response.  Condensor microphones are often used for instrument microphones, however, are the basis for many vocal microphones as well.  The disadvantage is that the capacitor requires a power source to keep it charged. Therefore, a condenser microphones require either batteries or a power supply delivered from the connected equipment.

Ribbon microphones consist of a thin strip of metallic foil suspended in front of a magnetic plate.  Sound waves cause the foil to vibrate, producing fluctuations in the electrical current, creating the audio signal.  This extremely sensitive configuration picks up a wide range of frequencies and produces an extraordinarily rich representation of the original sound.  The trade-off for this sensitivity is the delicacy of the mechanism – ribbon microphones are very sensitive to physical impacts and power overdrive.  (Oh, and very expensive).

So, as a speaker/presenter, how do you make sure you are heard and understood?

You speak to deliver a message – don’t let the technology become a distraction to that message. 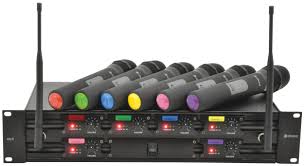